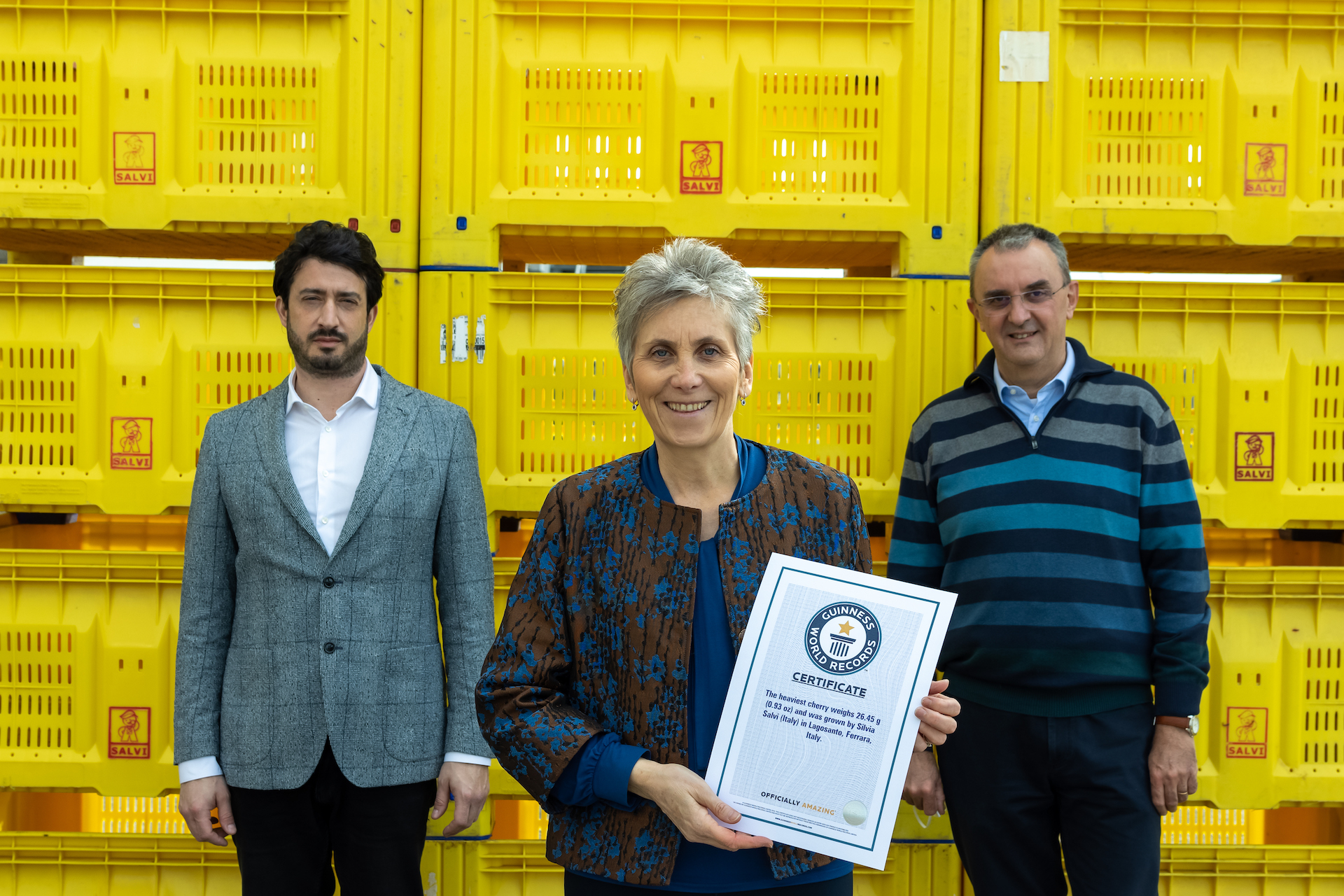 Salvi Vivai: a Sweet cherry in the Guinness World Records

Picked last June in the experimental cherry orchard on the Salvi Vivai farm in Runco of Portomaggiore (Ferrara), the cherry weighed 26.45 grams, earning a place in the Guinness World Records 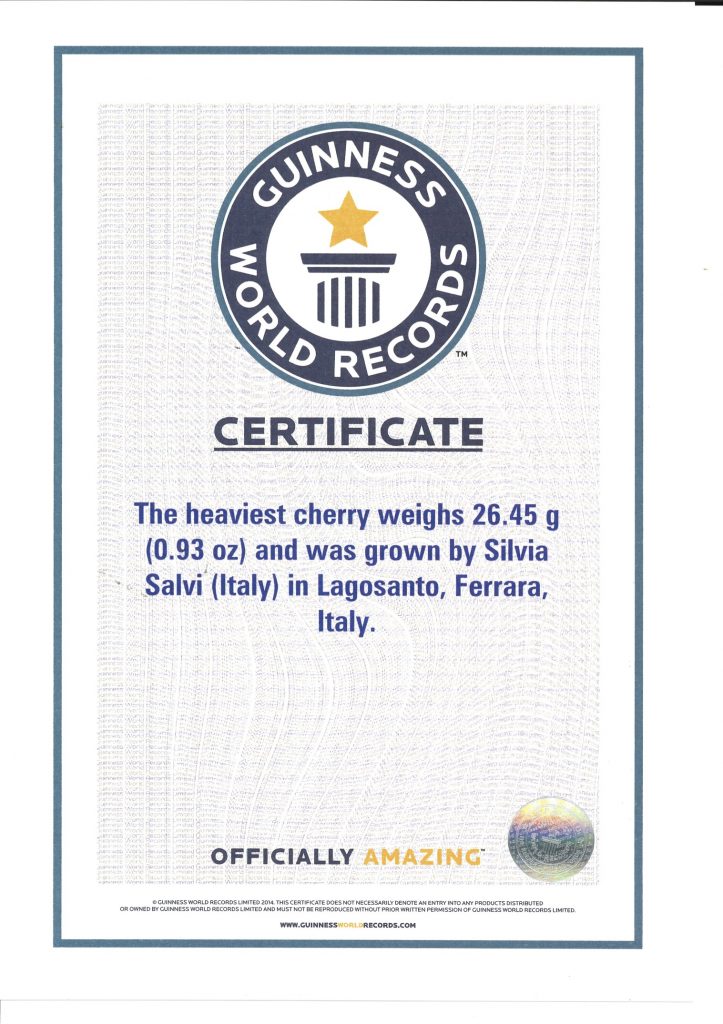 The Sweet Stephany cherry came from the experimental cherry orchard at the Salvi Vivai farm in Runco of Portomaggiore (Ferrara), weighing in at 26.45 grams and beating the previous record of 23.93 grams.

When it was picked last June, it was instantly clear that this cherry was impressively large. Due to the perishability of the fruit, a team of experts was quickly called to initiate the procedure for submitting the cherry to the prestigious Guinness World Records.

The fruit’s measurements and weight certificates were issued immediately, and with the support of Soc. Coop. Bilanciai Campogalliano the scales used to weigh the fruit were tested. Following the strict checks on the validity of the procedure and the parameters by the presiding notary, the confirmation has now been received. The Salvi Vivai and University of Bologna Sweet Stephany cherry has earned a place in the Guinness World Records as the world’s heaviest cherry.

“Of course, Salvi Vivai was very proud to hear this news: this world title is the crowning moment of a research and development process that began many years ago, in partnership with prestigious universities”, states Silvia Salvi, the director of Salvi Vivai. “Certainly, experimenting new plant varieties demands huge investments. The effects of each type of treatment on the product have to be studied carefully. The amount of water, nutritional supplements and agronomic treatments have to be calibrated every year to ensure continual improvement. Knowing that we are producing a Guinness cherry is yet another confirmation of the success of our teamwork”. 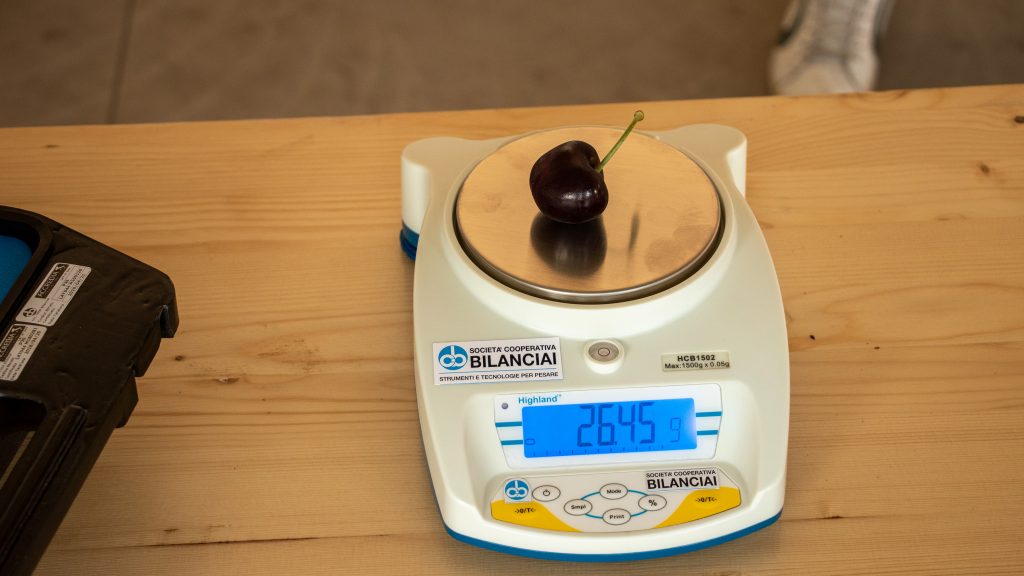 The moment of the official weighing of the Sweet Stephany cherry

“After more than ten years of research and development into this specific cherry family, this result is a huge satisfaction, as it confirms the importance of all the hard work done over the years”, explains Stefano Tartarini, Professor from the Department of Agricultural and Food Sciences of the University of Bologna who recently took over the management of the Sweet project.

The programme that led to the birth of the Sweet cherry began over thirty years ago at the University of Bologna, coordinated by Professor Emeritus Silviero Sansavini and Dr Stefano Lugli: a long process of traditional cross-breeding and selections.

Salvi Vivai has been producing and selling strawberry plants, apple, pear and cherry trees and apple and pear rootstocks.
The nurseries are renowned in Italy and internationally for their high quality and constant innovation, thanks to its continuous research into its plant varieties.